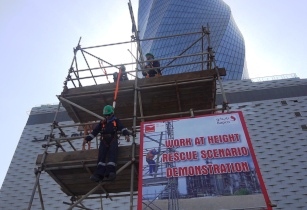 Delegates were aware that the drill would occur at some point during the day – but they didn’t know when, thus it came as a surprise and contributed to the atmosphere of emergency.

The drill, a combined exercise between Bapco and Bahrain Civil Defence/Fire Brigade, showcased Bapco world-leading expertise in rescue from height and emergency medical treatment, along with the Fire Brigade’s expertise at working in confined space and smoke-filled environments.

The cue for the drill came at the end of the presentation of Jack Waldron, Bapco’s Working at Height specialist, in which he had stressed that working from heights, if not controlled is the biggest killer in any industry. According to Ministry of Labour & Social Development statistics, 13 out of 20 deaths in the construction industry in 2017 were due to falls from height. All of these were preventable, he said.

“The message is “Stop the drop” he said. Even the most professional organisation in the world will suffer from emergencies. It is what they do about it that makes them professionals. He outlined measures to mitigate the risk, such as is training to international standards; emergency procedures; rescue plans and rehearsals; providing the correct personal protective equipment; qualified and competent persons; and communication, coordination and control. Bapco published its own Working from Height standard in 2017

At the end of the presentation, an alarm sounded, and delegates heard that a man had fallen from a scaffold, and smoke was coming from the 45th floor of the Wyndham Grand Manama Hotel. They were able to take part in the evacuation to an assembly point and to watch the rescue.

Commenting after the drill, Waldron said, “The drill has showcased what Bapco can and does do in an emergency at height. We train at a high level. It also demonstrates the relationship which we are building with the Civil Defence team. It’s a thrilling achievement, bringing these companies together today. Our community around us don’t necessarily see us until they really need us. To have this opportunity to do a drill, and showcase it to the local community, and even to the GCC and internationally, has been an honour.

“The collaboration between the two has culminated in an exercise involving not only rescue from height but also a smoke-filled environment exercise with the Civil Defence run during a major presentation. To pull it off has involved a good two months of planning and preparation.

“What I would say to the major organisations in fire, health and safety in Bahrain today is, we want to not only set the standard but also involve our sister and other companies, the likes of GPIC and Tatweer, as well as fellow contractors, to pull together in the safety field, and share ideas, experiences and training at an international level. There’s no ownership when it comes to health and safety because we all want to make sure we do the safest thing we can with the latest techniques, technology and training and have the ability to share expertise and experiences with other companies and also learn from how they’ve done things – it’s beneficial for all of us.

“Safety standards in oil and gas are always at a high level, and the beauty of our company is we will look at all international standards that work for our industry, find the best standards and apply them with the main aim of keeping our people safe.”

The original idea for the drill came from Alain Charles Publishing’s Martyn Diamond Black, who acknowledged the support of Bapco and Bahrain Civil Defence in his opening address and commented that the exercise had taken evacuation drills to the next level.

A certificate was presented to Bahrain Civil Defence/Fire Brigade at the opening of the conference as a mark of appreciation.

If you are interested in this subject, find out more about our events 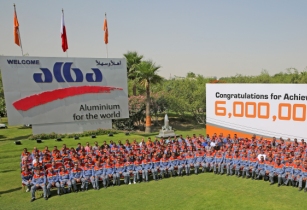 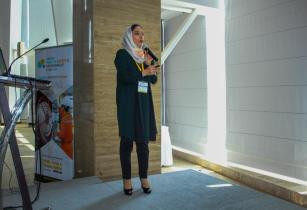 Mental health and workplace wellbeing in focus at Bahrain Forum